What is an automated dispensing device?

What is an automated dispensing device?

An automated dispensing device consists of a liquid handling system to deliver a certain number of samples and reagents to each well at high speed and accurately, a transport system to move heads with nozzles and plates, and a controller to control these systems. 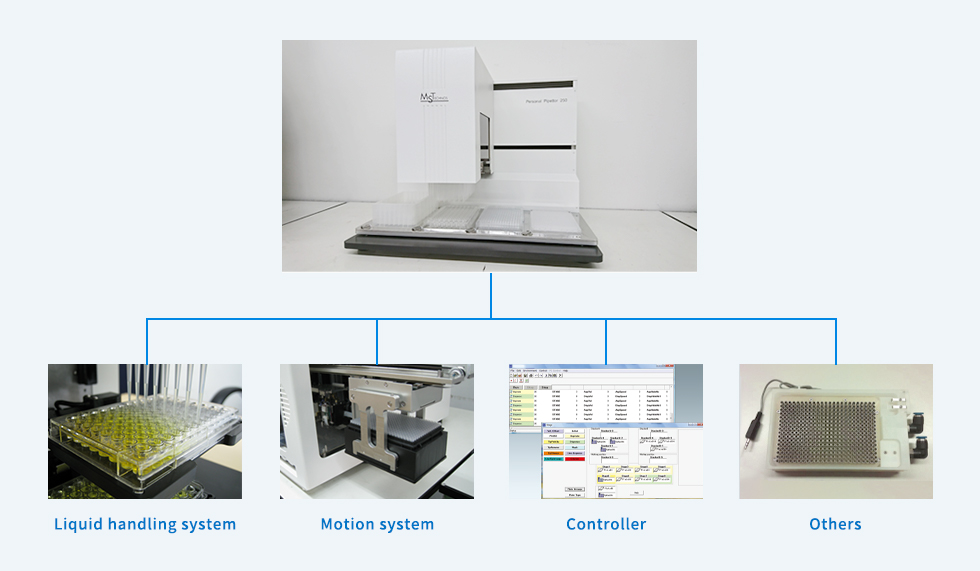 It defines the performance of the system that consists of pumps, tubes and nozzles and handles liquid.

Plunger pump is often used because it can process small amount of liquid speedy and precisely. Dispensing accuracy is expressed with AC (accuracy) and CV (coefficient of variation : the ratio of the standard deviation to the mean). AC is a indicator for absolute accuracy and CV represents repeatability. The system with only good CV may not be suited for quantitative analysis. There are 1, 8, 12, 24, 96 and 384 channels system.

Plate handling is in only one direction, loading and ejecting, usually. There are systems without plate handlers, manual system.

Head has to move in X and Y direction in accordance with the number of channels in the head and the number of wells in the applicable plates. In addition, movement in Z direction is necessary with specific functions.

Both liquid handling and motion system are controlled by the controller. Controlling Nozzles becomes more complicated if the system has functions such as dilution, agitation and nozzle flushing as well as dispensing. Even more complex systems contain functions that can only be achieved with moving nozzles and built-in stacker.

A system with stages called Areas can replace and flush tips at each Area. There are other systems as well, that can transfer specimen to plates with different number of wells, accommodate regent reservoirs and perform Solid Phase Extraction.

There are great many automated pipetting systems in biological, chemical and medical fields. Especially, applications for genomics, drug discovery, DNA and clinical test are most popular. Recently, demand in the system is getting greater and greater while speeding up with high throughput screening is attracted attention.

Automated pipetting system can automate works that operators have done. The most significant feature of the system is that it can process a large quantity of work human can never perform at high speed. At the same time, accuracy is increased and number of operation mistakes are decreased.

Dispensing accuracy is often expressed with AC (accuracy) and CV (coefficient of variation : the ratio of the standard deviation to the mean). It varies with dispensing volume.

Capacity or performance of the system is expressed with time spending at one dispensation. It is affected with factors such as dispensing volumes and dispensing actions, for example, tip replacement.

In the fields of genomics, drug discovery and clinical test, automated pipetting system plays an important role, being integrated with many other system and controlling them to process jobs automatically at high efficiency rather than it is used as an isolated system. The most growing region of research and development of the system is HTS, High Throughput Screening, combining assay, one of a methodology in analyzing especially biological samples, and automated pipetting systems together. Integration with other units such as stackers to process various operation like regent preparation and pre-process of specimen efficiently becomes more popular, comparing with those systems dedicated only for one specific purpose.

Microplate reader is a system that can measure reaction quantitatively, optically scanning samples mixed with regent.

It is indispensable for clinical test and drug discovery to automate the process. Although the test is automated, efficiency of the whole system does not increase unless preprocess, sample preparation is also automated. Accordingly, automated pipetting system is required to pre-process automation.

Due to its outstanding function and rich variations, dispensing devices are widely used in various industrial fields and research areas.

Genome is the whole of an organism's genetic information. Even the simplest organism like a bacteria has couple hundreds of gene and number of genetic information sums up to couple hundred thousands. Computer is necessary to analyze vast amount of data in research for expecting applications like drug discovery and it is called Bio-informatics. And it is impossible to analyze giant genome of human, estimated 30 billion in number, and most of creatures, if the process is not efficient. That is why high throughput is required in processing systems.

Genetic information is expressed with 4 letters, A, T, G and C. Even though, one DNA is too long to analyze at a time. Then, an idea of cutting DNA at random in short pieces enough to analyze is proposed.

The DNA fragments are incorporated with special DNA called Vector and replicated in large amount in culture of Escherichia coli, for example. ( cloning ). In this process, automated pipetting systems are used dispensing culture fluid in vessels and planting E Coli on them.

After that, computer reads fragmented DNA sequences and restore a whole DNA sequence from them.

Human Genome Project is a just one of Genome Projects. There are many projects such as for rice, yeast, mouse and fruit fly and researched well, expecting biological, medical and agriculture applications. In such research facilities, there are great number of automated pipetting systems running.

Drug discovery, developing a new medicine, is the most important business of pharmaceutical companies. Even though, it does not start from a scratch but following actions like synthesizing so called lead compounds, candidates of drugs, replacing a part of them and simplifying them.

To select lead compounds, a great number of candidate materials have to be checked reaction with specimen. ( screening ) Process like those, handling many samples and regents can not be done without automated pipetting system.

DNA is material that contains genetic information. There are 4 specific parts defined by chemical bases: adenine (A), guanine (G), cytosine (C), and thymine (T). DNA is strung together in a chain. The 2 chains are connected with those AGCT's and form a spiral called a double helix. Because A only connects T and so as G and C, the 2 chains can only replicate the other if they are separated. This makes genetic information copied exact at cell division and the information is transferred to the new.

DNA test does not read all DNA sequences estimated 60 billion but finds specific pattern in the DNA sequence and checks whether it matches or not. Small amount of DNA is copied ten thousands times with PCR method. PCR is the one of replication methods that is adding separated DNA chains by heat into materials for DNA in cool to reconstruct them. After one cycle of replication, it is diluted and the replication is repeated couple dozens times. In such work, with no error permitted and very large amount of samples, automated pipetting machine is suited.

Though human gene was analyzed in Human Genome Project, it is not completely solved what role each gene plays.

A gene made up DNA makes mainly specific proteins from the information in it, that work various way in the body. It is called gene expression.

Not all the genes are expressed and researchers are studying connections between disease. In this field, automated pipetting machines are playing great roles, performing regent preparation and so on.

Clinical test detects disease and shows its extent and cause in figures. Blood and urine test, taking electrocardiogram and blood pressure measurement at medical check-ups are the clinical tests.

To check large amount of specimen, it is useful to use automated pipetting system. For example, in the blood test, it measures cholesterol, glucose and neutral lipid level and amount of antibody and antigen produced at immune response. In such immunochemical test, a material that reacts only specific antibody is added to specimen and the result is measured with amount of enzymes and luminous reaction.

The fact that there is difference in liability to those diseases like diabetes, rheumatism and asthma with gene variation, genetic polymorphism, is revealed.

One SNP, single-nucleotide polymorphism that is a DNA sequence variation occurring in the genome is calculated 3 millions in case of human. It is relatively easy to detect and becomes one of the most effective way to find genes result in disease.

There should be at least 1000 samples to detect one SNP statistically and we have to analyze the order of billon genes. In this research, automated pipetting system is essential.